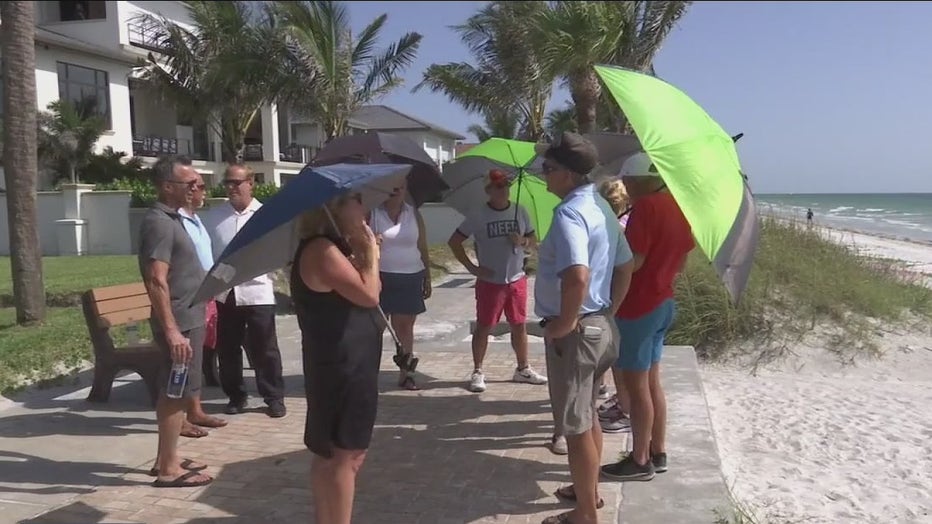 BELLEAIR SHORE, Fla. – A skin cancer survivor is fighting back against an umbrella ban at Belleair Shore after he said he received a $116 fine, and he’s not alone. Multiple residents feel certain rules violate their rights as homeowners.

There’s no shade allowed at Belleair Shore but some homeowners who live on Belleair Beach are determined to change that.

Back on June 12, Redero had an umbrella and two shade tents set up on the beach when he said Pinellas deputies hit him with a $116 fine for violating an ordinance which bans any kind of temporary shade structures. Redero, who’s had several cancer spots removed from his face, feels he should be able to enjoy the beach without sacrificing sun protection.

“We bought our house. Exactly for this. We live in Belleair Beach or residential Belleair Beach, and we live just down the street. The umbrella is making it impossible for us to come and spend some time at the beach,” Redero said.

The umbrella ban was originally put in place about two years ago after issues with the pandemic and non-residents coming to the shore. Now, some feel the extra rules are only a means to limit access and deter Belleair Beach residents from taking up space.

“One of the things they said, which is actually unbelievable, it’s blocking their view. I mean, these houses are absolutely gorgeous. They’re three stories high. They a 24 seven view of the beach,” Belleair Beach resident Joe Manzo said.

Back in September 2020, Manzo who’s an attorney and also the former Belleair Beach Mayor filled a lawsuit against the Town of Belleair Shore seeking damages and asking the town the repeal the umbrella ordinance. Forty-eight people have since joined the suit, which is still working its way through the courts.

If neither can reach a settlement, Manzo said they are prepared to go to trial which would most likely happen sometime next year.

“We don’t want to go someplace else. And we got a Florida constitutional right to use that beach, and by God, we’re going to use it,” Manzo said.

lambsheadguide.com
We use cookies on our website to give you the most relevant experience by remembering your preferences and repeat visits. By clicking “Accept All”, you consent to the use of ALL the cookies. However, you may visit "Cookie Settings" to provide a controlled consent.
Cookie SettingsAccept All
Manage consent

This website uses cookies to improve your experience while you navigate through the website. Out of these, the cookies that are categorized as necessary are stored on your browser as they are essential for the working of basic functionalities of the website. We also use third-party cookies that help us analyze and understand how you use this website. These cookies will be stored in your browser only with your consent. You also have the option to opt-out of these cookies. But opting out of some of these cookies may affect your browsing experience.
Necessary Always Enabled
Necessary cookies are absolutely essential for the website to function properly. This category only includes cookies that ensures basic functionalities and security features of the website. These cookies do not store any personal information.
Non-necessary
Any cookies that may not be particularly necessary for the website to function and is used specifically to collect user personal data via analytics, ads, other embedded contents are termed as non-necessary cookies. It is mandatory to procure user consent prior to running these cookies on your website.
SAVE & ACCEPT